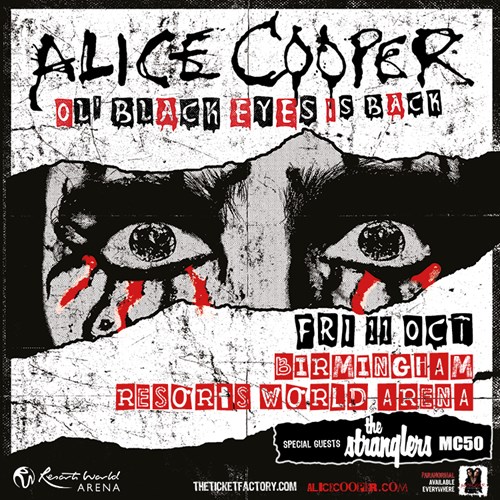 Alice Cooper is back in the UK this October, returning to the country that first embraced him, in the 50th year since the first Alice Cooper album release, and bringing an all-new show. Still the best rock show in the world, a night with Alice is full of the shocks, dark humour and guillotines but with a not-so-secret ingredient – incredible songs performed by a brilliant band. The greatest ringmaster in rock conducts some of best musicians on the planet, from Chuck Garric’s blistering bass, to the triple guitar attack of Nita Strauss, Ryan Roxie and Tommy Henriksen, added to the thundering Glen Sobel, consistently voted the world’s best rock drummer. Alice Cooper classics like ‘Under My Wheels,’ ‘Schools Out’, ‘Poison’, ‘Billion Dollar Babies’, ‘No More Mr Nice Guy’ and the rest are joined by tracks from acclaimed recent album - Paranormal, released on earMUSIC which features guests like ZZ Top guitarist Billy Gibbons, U2 drummer Larry Mullen, Deep Purple bassist Roger Glover and also saw the highly anticipated mini-reunion of the original Alice Cooper band members. And for the UK dates, Alice is once again bringing a killer bill. Iconic UK band The Stranglers are special guests plus MC50 (featuring Wayne Kramer). The Stranglers boast a rich history, breaking the punk mould to produce many iconic hits down the years. From the languid ‘Peaches’, to the anthemic ‘No More Heroes’ and ‘Golden Brown’, the Londoners remain a visceral live act. MC50 is original frontman Wayne Kramer’s celebration of 50 years of the MC5’s Kick Out The Jams, one the most incendiary rock albums ever. Playing the record from start to finish, Kramer has assembled a new line-up that recently completed both a US and a UK European tour in 2018, featuring Soundgarden’s Kim Thayil, and Fugazi’s Brendan Canty. The MC5 and Alice Cooper have history. Alice was a Detroit native and returned there in 1970 to make his name in the city while The MC5, The Stooges and Bob Seger, among others, were tearing up the city. Harder, faster, stronger and darker than the hippies on the west coast, they changed music forever. Commented Alice ‘We’re coming back in October for a big tour with our new show ‘Ol Black Eyes Is Back’ it’s going to be a great night with my very special guests The Stranglers plus the MC50’

Whatever the occasion, Freestyle is the perfect single-event hospitality package to entertain friends, family or clients, offering exceptional hospitality and ultimate comfort, so you can relax and enjoy the night ahead.

To the screamers, moshers and laugh out louders.

To those that saw the hottest band the first time around or are the first timers in the crowd. To those that want to treat the kids...and the big kids too! The new Utilita Arena Birmingham and Resorts World Arena membership has arrived, giving you access to the hottest tickets, exclusive discounts and unlimited bragging rights. You’ll never miss the unmissable again!